Diary of a White Collar Criminal 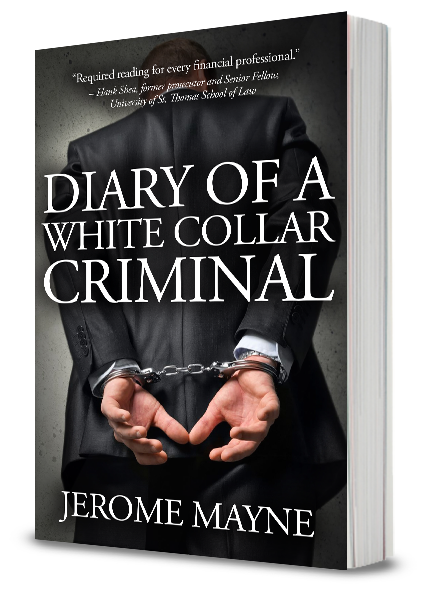 by Jerome Mayne
Self-published, using Goldfinch Publishing's A La Carte Services
In this intimate diary, Jerome Mayne shares his life saving lessons of white collar crime, ethics, morality, trust and humility, with wit and passion. In his 20’s, Jerome was an aspiring finance professional on his way to the top.  With his new family and his sights set for success, the world was his oyster.  Lured by the prospect of big business, his career derailed when he joined forces with his future co-conspirators in a real estate and mortgage fraud scandal. It was indeed white collar crime.

★★★★★ “REQUIRED READING FOR EVERY FINANCIAL PROFESSIONAL.”

The nightmare begins with a hurricane of FBI investigations, criminal court and prison.  His journey twists and turns through the psychological collapse of prison, cancer and addiction.  Through it all, one woman’s undying devotion helps him climb back from defeat and self-pity, to a new life of integrity, trust and self confidence.

This book is a real lesson in corporate ethics and a story of overcoming adversity with self persistence, and the love and devotion of others.

DIARY OF A WHITE COLLAR CRIMINAL

The epic story of a regular guy who gets caught up in a white collar crime conspiracy. By making a series of bad decisions in the corporate world of real estate and mortgage finance, Jerome Mayne finds himself taking a tail-spin. His world begins to fall apart with FBI investigations, federal court, and finally his first day in prison.

This book is a classic American tragedy: Self-made man becomes a captain of industry through hard work and risk-taking. Once an employee of a mega bank, he becomes an employer and enjoys watching others raise their standards of living because of his success. He’s got all the trappings of “making it”, money, cars, a big house, a family . . . then the past comes back. Suddenly the hero is a pariah. He loses everything, family, status, friends, the trappings of wealth, even his health. Then redemption comes in the form of a soulmate who seems too good to be true.

Mayne is a successful Improv and Standup Comedian. In this book, he brings his razor sharp comic skills to lay bare the emotional rollercoaster ride that started when his cell phone rang and the caller said, “This is the FBI, we will be taking you into custody today.” Mayne’s diary effectively connects by making the readers feel like they are along for his ride and, even feel the despair when he doubted his relationship would weather a prison stint.

Many books are written on white collar crime and prison. However, this book is a true story. As the title says, it is a diary.

For most of his adult life, prior to being convicted of conspiracy to commit wire fraud, conspiracy to commit mail fraud and money laundering, Jerome has kept a journal. While he was serving his 21 month federal prison sentence, he was unable to keep a journal or diary of any kind but he wrote letters to a woman who would eventually become his wife. The diary and journal prior to being incarcerated, as well as the letters that he wrote to his lady-friend, became the content for this book.

As a performer and entertainer in the music, theatre and comedy business, Jerome captures audiences at conferences and conventions, across the United States and Canada.  His keynotes and workshops are riveting and emotional.

Book Jerome for the general session, as the keynote speaker for your next event.  You deserve a keynote speaker who will deliver a story that your audience will not forget.