Where the Hell is Tesla? Interview on FanboyPlanet.com 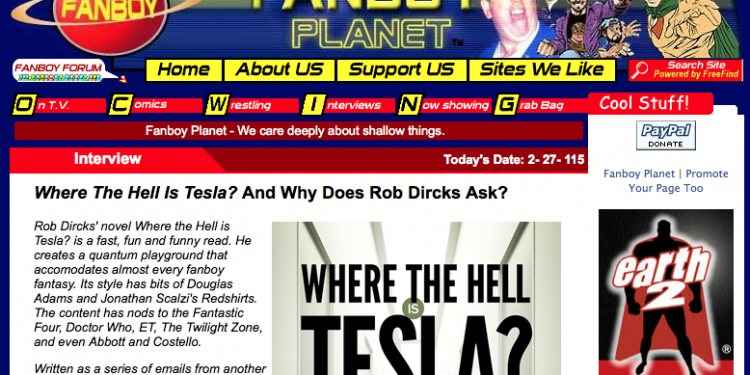 Where The Hell Is Tesla? And Why Does Rob Dircks Ask? — by Daniel DeFabio

Rob Dircks’ novel Where the Hell is Tesla? is a fast, fun and funny read. He creates a quantum playground that accomodates almost every fanboy fantasy. Its style has bits of Douglas Adams and Jonathan Scalzi’s Redshirts. The content has nods to the Fantastic Four, Doctor Who, ET, The Twilight Zone, and even Abbott and Costello.

Written as a series of emails from another dimension, we find Chip and Pete and their strange, lovable, fuzzy, alien sidekick Bobo trapped in an infinite hallway with doors to all of the dimensions of the multiverse of all possible existences. The trouble is the doors aren’t labelled and they can’t find their way back home. At least not to the home that is exactly like their own. They often find a dimension that is mostly similar to their own but just one little difference throws it all off. A difference such as lighter gravity, meaning Chip and Pete are super strong in that one dimension and actually brand themselves as super heroes The Brute and Awesome Man…