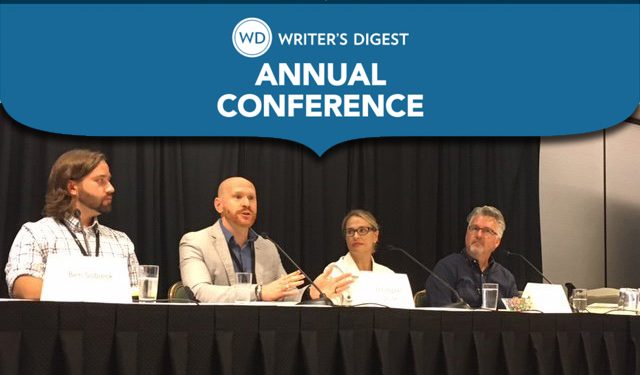 A past attendee of the Writer’s Digest Annual Conference in New York City, I was shocked when they contacted me to speak on a panel this year. Me? At the front of the room?

Yes, they were in fact serious, and our panel (I hope) was a serious help to budding writers and potential self-publishers who are asking themselves the big question: “Should I self publish?”

To answer that question, moderator and fellow indie author Tabitha Lord asked panelists and attendees about the pros and cons, logistical issues, potholes to avoid, and what our goals are. Here’s a sample of some of the questions (with my own personal answers):

Why did you choose to self-publish?

I have a pretty DIY personality, and when I started getting rejections from agents and publishers, I said, hey, maybe I can do this on my own. I’ve always liked the idea of technology leveling playing fields, and this case it really helped. There is definitely another path for self-published authors to be discovered — it’s true. Take a look at authors like Hugh Howey (the Wool series) or Andy Weir (The Martian), who started out as self-published authors, and eventually were found by major publishers.

What are the biggest misconceptions about self-publishing?

I think that it’s somehow not as legitimate as traditional publishing. (Like you haven’t paid enough dues, or sacrificed enough.) But I think as the years progress, more and more examples of self-published authors succeeding with quality work contradict that position.

As indies, we’re responsible for all aspects of our project. So… How do you strike the right balance between creative writing time and managing the business side of things?

What balance? Really, though, it’s simple project management. Treat it as a business, with some time going to writing, and some time managing the marketing/business. (That said, it’s not always easy!)

What is the most satisfying part of your work?

I think the idea of creating every part of my product — the story, the cover, the ebook, the audiobook, the marketing materials — gives me a great sense of accomplishment. I like technology, and design, and obviously writing, and it’s a thrill to be able to use all those skills at once.

Conversely, what is the most difficult?

I think the writing itself is the hardest. It’s this painful, gut-wrenching process, to pull a story out of your head and try to make it something worthwhile. Everything else is hard, too, but it’s all mostly just work. The writing is the magic — and it is NOT easy!

How did you identify your target audience and reach them with your book?

• With ebook promotions, like BookGorilla, you choose your genres.
• With Facebook/Twitter/Google ads, the targeting tools are very specific. (not that I’ve had an amazing amount of luck)
• On goodreads – by becoming a member of groups in my genre, and offering the book for review there

I have a whole article on everything I did here.

And if you’re interested in recording
your own audiobook, get the basics here.

What is the one piece of advice you would offer to an aspiring author considering the indie path?

If you’ve got the DIY bent, go for it — and don’t be intimidated by processes that look complex, like recording your own audiobook. If you tackle these tasks one at a time, keep putting one foot in front of the other, you will progress. (Nick Spalding story.)

Share one mistake you’ve made along the way that perhaps turned into a learning experience.

I probably should use an outside book cover designer, but I have so many years of design experience, my pride won’t let me.

Have you hired other professionals to help with any aspect of your project? If yes, who proved most valuable and why?

No, but like I said, I should probably get a cover designer.

What does a typical day and writing routine look like for you?

On writing days, wake up at 7am and go right into the home office, and try to get 2k words done (although 1.5k words is great). I much prefer “good” words to “just get them down” words.

What are the keys that have made your book a success?

I think I’ve got a pretty decent eye for writing humor, and I love writing dialog, so the basic original style I have has been the foundation. But then layer on top of that two things: GETTING REVIEWS, and paid email blasts.

Who and what has inspired you with your writing?

Hugh Howey definitely, from a self-publishing perspecive.
Kurt Vonnegut for actual writing — I think he might be the best writer I’ve ever read for poignancy mixed with humor
Also George Orwell — 1984 had an extremely profound effect on me. it’s my favorite novel, not just for the story, but the actual writing, and the dread and fear and hopelessness that he was able to evoke with just words. Amazing. 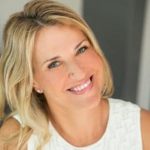 Tabitha’s debut novel, Horizon, won the Writer’s Digest Grand Prize for Self-Published Fiction in 2016, and was named finalist in the Next Generation Indie Book Awards and National Indie Excellence Awards. Infinity, the second book in the Horizon series, was released in June 2017. Her short story “Homecoming” appears in the anthology Sirens, edited by Rhonda Parrish and published by World Weaver Press, and was recently nominated for a Pushcart Prize. She is also a senior editor for www.BookClubBabble.com.

Visit her blog at www.tabithalordauthor.com, where she discusses favorite topics including parenting, teaching, and her writing journey. You can also follow her on twitter @tlordauthor, Pinterest at www.pinterest.com/tlordauthor, and connect on Facebook at www.facebook.com/tlordauthor. 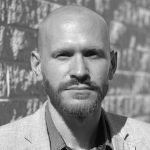 Chris is the award-winning author of The Black Lens, a dark literary thriller that exposes the underbelly of sex trafficking in rural America. The author won Grand Prize in the 2016 Writer’s Digest Self-Published e-Book Awards and became a 2016 Liberator Awards Finalist for his debut novel and anti-trafficking work. As aformer reporter with a master’s degree in journalism, Stollar conducted more than three years of research for The Black Lens, including interviews with survivors, social workers and police officers. He is donating 10 percent of his earnings from this book to organizations that battle modern slavery. Learn more at http://christopherstollar.com/. 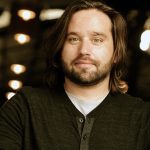 Benjamin is a thriller writer with several non-fiction and fiction works to his name. He is the author of The Writer’s Guide to Weapons (Writers Digest Books) and maintains a blog about weapons in fiction at CrimeFictionBook.com. He is also the editor of The Writer’s Guide to Wattpad, forthcoming from Writer’s Digest Books. On the fiction side, he is a Wattpad Star, with more than 1 million reads on Wattpad on titles such as “When the Black-Eyed Children Knock.” In 2016, he won the world’s largest online fiction contest, the Wattys, for “Black Eye: Confessions of a Fake Psychic Detective #2.” He’s also collaborated with TV and movie studios through Wattpad, and is the creator of The Writer’s Glove® (http://www.thewritersglove.com)